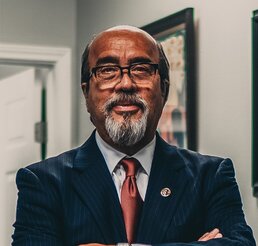 If you are accused of a crime that violates a statute passed by Congress, you will be tried in federal court. That means you will be prosecuted by U.S. attorneys backed by the U.S. government and its considerable resources. For the best chance at a favorable outcome, you need a criminal defense attorney who has successfully defended clients charged with federal crimes.

At RICHARD CARRIZALES, P.C., I have both the background and skill to defend the rights of people throughout Texas facing federal criminal allegations. I have built my reputation on getting results in cases that are often complex and have serious consequences for defendants and their families. My intimate knowledge of the federal criminal justice system and determination to challenge federal prosecutors gives my clients an advantage in every case I handle.

There are many crimes charged at the federal level and adjudicated in federal court. Some of those include crimes against federal agencies, such as:

Defendants are also charged federally when they are accused of crimes that cross state lines, such as moving a kidnapping victim from one state to another, and white collar crimes such as fraud, embezzlement, money laundering, internet crimes and forgery. When you face any federal criminal allegation, it is imperative you're represented by an attorney who has successfully represented clients in federal cases.

People charged with federal crimes face prosecution by U.S. attorneys who have the full weight and substantial resources of the federal government behind them. That's why it is vitally important to retain a defense attorney with federal court experience who is up to the challenge. I have represented clients in cases before U.S. district courts and can litigate cases in U.S. courts of appeal. I draw on a thorough understanding of federal criminal law and the Federal Rules of Criminal Procedure, including the Federal Bail Reform Act and Federal Sentencing Guidelines, to defend clients against a range of serious charges.

Don’t give the federal prosecutor an added advantage. Even if you only suspect you're being investigated for a federal offense, you should seek skilled counsel able to develop a strong defense strategy that preserves your rights. At RICHARD CARRIZALES, P.C., I investigate all available evidence and make use of all procedural tools at my disposal to ensure that you get the justice you deserve in a federal criminal case. Through meticulous preparation and firm attention to detail, my efforts are always focused on achieving that goal.

When you have been charged with a federal crime, RICHARD CARRIZALES, P.C. has both the skill and experience to provide a diligent defense. Call 214-821-6055 or contact me online to schedule a free consultation at my Dallas office.

Thank you. Your submission has been sent.

RICHARD CARRIZALES, P.C. is located in Dallas, TX and serves clients in and around Richardson, Dallas, Desoto, Lancaster and Dallas County.

Attorney Advertising. This website is designed for general information only. The information presented at this site should not be construed to be formal legal advice nor the formation of a lawyer/client relationship. [ Site Map ]

See our profiles at Lawyers.com and Martindale.com